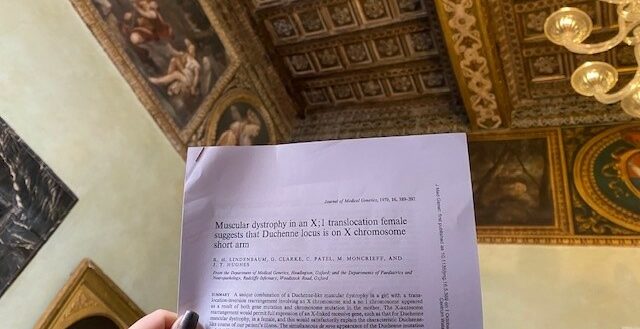 #apaperaday special: Duchenne in a female

Today we kick off with a paper from the Journal of Medical Genetics by Lindenbaum et al from 1979 on a female with Duchenne. Since the dystrophin gene, which is mutated in Duchenne is located on the X-chromosome, Duchenne occurs primarily in males. DOI 10.1136/jmg.16.5.389

Researchers knew it had to be on the X-chromosome but did not know where. This made genetic counseling very difficult, so researchers were ‘hunting’ for the location of the gene. Notably, females with Duchenne with a specific mutation type (translocation) have been crucial for finding the location!

A translocation is when part of one chromosome is exchanged with part of another chromosome (say chromosome 1). When this occurs with the X-chromosome, the ‘break’ can go through the dystrophin gene. Now part of the gene is on chromosome 1 and part is on chromosome X. This disrupts the code because it cannot longer be produced from start to end.

However, the other X-chromosome of the woman still has the functional dystrophin gene. Why is that not used to produce dystrophin? This is due to a process called X-inactivation. When a female embryo is ~200 cells, each cell will inactivate one of its 2 X-chromosomes randomly. That pattern is then inherited by all daughter cells.

This is not compatible with life. So, the cells in which that happens will die and only the cells where the non-translocated X-chromosome is inactivated will survive. This means that this female embryo will not be able to produce dystrophin. The X-chromosome with the functional dystrophin gene is not active.

Now to the paper: Authors report a girl who at 5 years of age showed all the signs and symptoms of Duchenne:

The girl required a wheelchair at age 8 (this was before steroids were used).

A biopsy was done and the analysis revealed the typical features of Duchenne (inflammation, regeneration, fibrosis). Note that this was before the gene and the protein were found, so authors could not check whether dystrophin was present or absent and had to rely on symptoms and histology only.

This later resulted in the identification of the gene in 1986 and the dystrophin protein in 1987. Already in 1985 genetic counseling could be offered to some families using the regions known to be part of the dystrophin gene identified with this ‘gene mapping’ technique.

So, women with Duchenne have played a crucial role in finding the dystrophin gene as back then the techniques could not pick up the deletions within the gene that occur in most men with Duchenne.

View all posts by worldduchenne